42.0 The Subject is Bananas 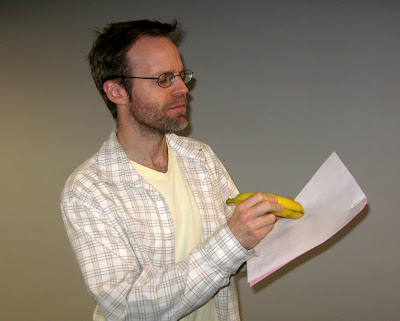 Starring Erin & Mike
Filmed on Location in Beautiful Downtown Sellwood
Suggested Reading List: Everything by Richard Meltzer
“One banana, two banana, three banana, four”
There’s a war. Or two. Or three. Sometimes here, sometimes there. The election’s over. New folks in office. The leaves are down, gathering at the sewers like wet cereal. There’s a new “Law & Order” franchise. And Simon MacCorkindale is dead, while Mario Lopez has a new daughter.

But one thing stays the same: There’s a banana rotting in a bowl on top of my microwave.

“Hey, BANANAS!” I exclaimed at the Safeway. “Are you going to eat them,” asked Erin, knowingly. “Yeah, definitely,” I asserted, “I need to maintain my potassium.”

Things weren’t always bananas with me. Historically, by which I mean pre-Erin, my relationship with bananas had been, oh, I don’t know, cordial (curiously, the same cannot be said for cherries). My first taste of banana I’ll assume was spooned from a Gerber Baby Food jar. (Was it even banana or merely essence of?) My first CONSCIOUS banana (Cavendish variety) was sliced (knife to thumb) into a bowl of cornflakes, a shuffle of sugar coating the slices.

And we progressed no further, banana & I. On rare (and dread) no-snacks-in-the-house occasions, I’d eat A WHOLE BANANA. Beyond that, we really never got to know each other. Banana split? No thank you. Banana-flavored gum? I’d rather not.

In a non-food, banana-as-icon way, I was a much bigger fan. Woody Allen’s “Bananas” is a favorite film. And I never missed “The Banana Splits” after school (I even met Bingo the monkey at Kings Dominion in the late 70s). And what about Andy Warhol’s cover for the Velvet Underground’s debut album! (Peel it & see!)

Things change. Thanks to Erin, I’m a banana convert.

You ever have a BAD banana? If you did, it’s your own fault. If a banana looks good, it’s good. If it looks lousy, it’s lousy. BUT…that just means don’t peel it & eat it cuz it’s mushy &dark. Don’t drop it in the trash, index and thumb delicately pinching the stem, hoping the fruit doesn’t slip from its peel. Almost there. Why are you so far from the kitchen anyway? Were you eating it in the garage? Anyway, MAKE A LEFT TURN TO THE FREEZER. Put it in there! Why? Cuz old bananas (I don’t mean really rotten & moldy ones, though) make the BEST breads &cakes! That’s banana bread! Which is kind of like a cake. Like a pound cake really. Let’s call it a loaf. Banana bread is the free spirit of baked goods. Is it a dessert? Yes. What about for breakfast? Yes, too! I’ll eat it anytime I want.

NOT NECESSARILY ACCURATE NUTRITIONAL INFO DEPT: I think, and you might want to look it up, banana bread contains a full daily serving of fruits & vegetables and grains. Throw in a handful of chocolate chips, and there’s yr dairy. Then, I don’t know, a hard-boiled egg or a corn dog to fulfill yr meat & protein needs.

All thanks to the banana you were too lazy to eat last week.


Erin’s intro: Mike here. So where’s the recipe? Erin doesn’t have one. She gets her banana bread recipe from good old Betty Crocker. You probably have the cookbook in your house. Even if you’re sure you don’t, take another peek. See! Look at that! You DO have it. So just follow that recipe. Then throw in a handful of chocolate chip for that ITSK touch!

The “In the Sellwood Kitchen” cast and crew can be contacted at: erinandmike@sellwoodkitchen.com
Posted by The O'Shaughnessys at 10:56 AM 125 comments: