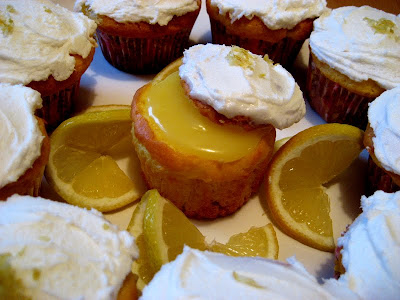 Before the winds conspired and the leaves and dust and litter rose in a dioramic Ascension, I dreamed of dessert. In moments a soundless fury of wind would rush down SW Morrison like a big baby blowing out his candles. “Lemon curd,” I whispered in my car, waiting for Erin. “Lemon curd,” I whispered again, seeing her step out of her building with her hair aloft. “Must’ve been a rough day,” I thought. Then the atmospheric mood swing hit and I saw a troupe of Marcel Marceaus walking against the wind. Erin struggled to the passenger side and we entered the stop-and-go flow of rush-hour traffic cum mass-hallucination evacuation. 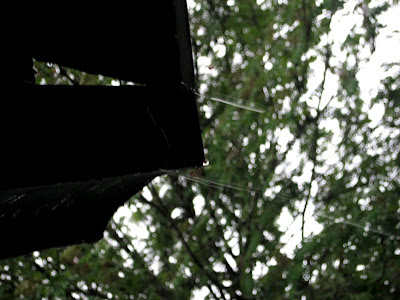 “Wow, this storm came out of nowhere!” said Erin.

“Oh, yeah, I know. Listen. This isn’t going to affect dessert, is it?” 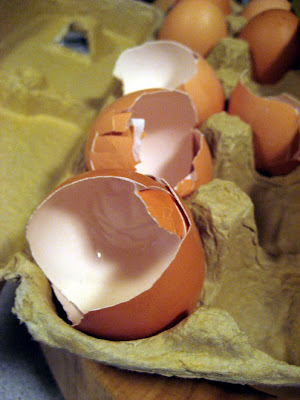 It wasn’t, I was assured. We were having a few friends over for dinner, like we do; but the barbecue, as mouthwatering as it would be, was not the main attraction. It was: Lemon Curd Cupcakes. 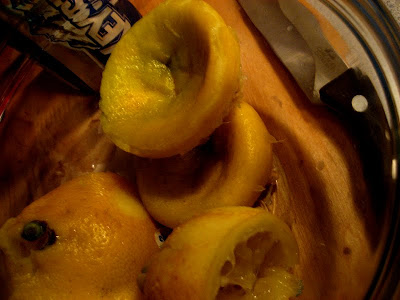 Curd? That sounds awful. I know, right! But it’s not skimmed curdled milk, as I first horrifyingly assumed. No, this is something else, a fruit curd, lemon to be precise. 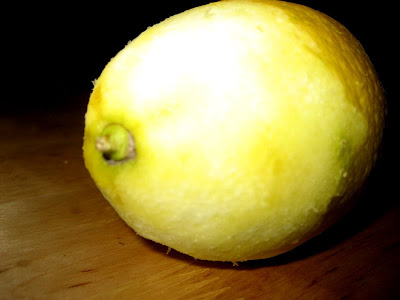 The dinner conversation was as delightful as ever. Jessika, who despite critiquing the décor of our bathroom on her last visit, broached the lively subject of strange human pervasions. We guffawed, howled and snickered. We raised our stubby beers in bawdy approval of our shared love of off-color euphemisms. 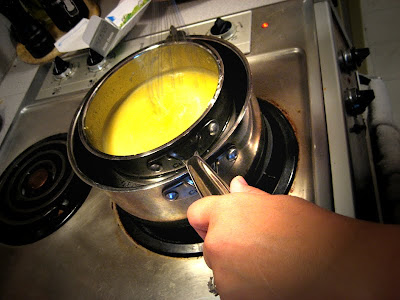 But eventually, the noise went white as my blue eyes, green with gluttonous greed, drifted to the oven, wherein those cupcakes quickly gestated in the Hotpoint womb. 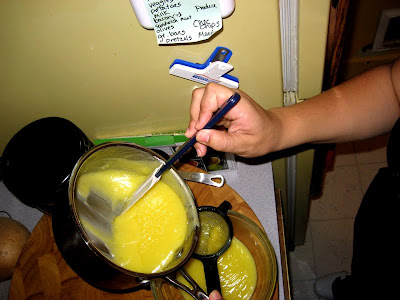 The lemon curd, I sensed with feral desperation, cooled in the fridge. I began astral projecting into the appliances when a gale of laughter slapped me back to the table.
“The ‘dinner bell’!” offered Jimmy. Adam lost it! 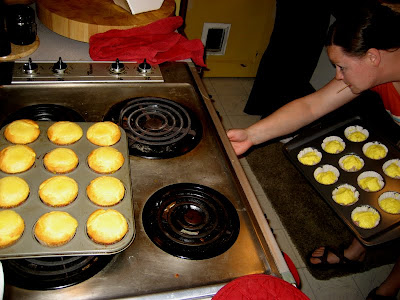 The table was cleared. Erin and Sarah began filling and frosting the cupcakes. I busied myself with odd distractions: In my head, I tried listing the Seven Dwarves in order of likability (for the record, Bashful is the worst). 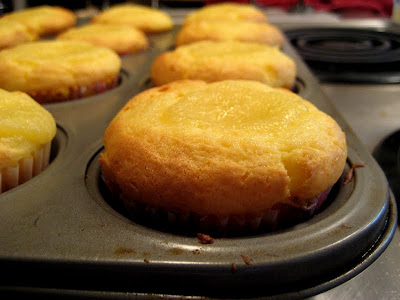 I find myself locked in a spell that can only be broken by the taste of lemon curd. Erin detects my non-verbal cue. 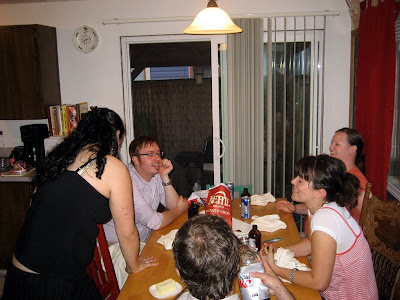 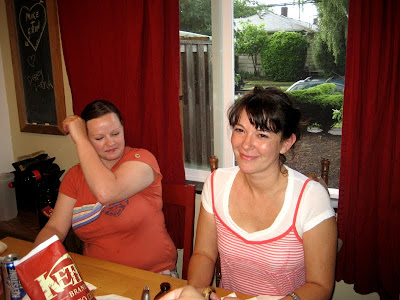 She hands me a cupcake. A breeze, smelling of rain, drifts in through the screen door. The world is perfect enough. 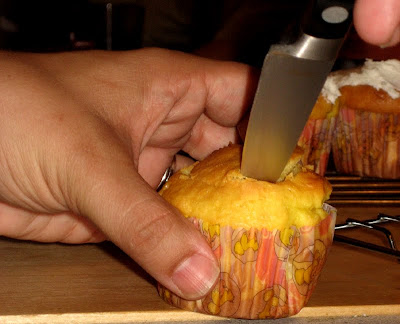 Erin’s Intro: This recipe is perfect for a non-diet spring treat. It’s cute and fresh and fun. If you’ve never had fresh lemon curd, you are totally missing out. It tastes like summer, and by itself, it’s gluten free. Add it to these fancied-up cupcakes and homemade butter cream frosting and you have a REAL treat. There are two choices listed, and they are both irresistible. For the frosting, you can find a simple butter cream recipe or use pre-made. We creamed butter, lots of powdered sugar, vanilla and a little milk. It’s a basic recipe and easy to find so we didn’t list it here. These cupcakes are super cute and perfect for spring gatherings. Hope you enjoy!

In a double boiler, mix the above ingredients on low to medium low heat. Whisk regularly until the mixture becomes thick. Remove from heat and strain until it is smooth. Let cool.

In a mixer, cream together cream cheese and sour cream. Add water, oil, eggs and mix well. Add cake mix and pudding and mix until smooth. Batter will be thick. If you have a spring loaded scoop, use it to spoon mixture into muffin tins lined with cupcake wrappers. Bake at 350 for 20 minutes. Let cool. Makes 24 cupcakes.

Two Options for Lemon Curd Cupcakes:
1) Baked-in: Before baking the muffins, make a dent in the top of the batter and fill it with a spoonful of lemon curd. Bake as directed.
2) Filled-in: After cupcakes cool, cut out a cone from the top of the cupcake. Fill the hole with a spoonful of lemon curd using a piping bag. Level off the cut-out piece of cupcake and place it back on top of the lemon curd. Cover with frosting to set in place.
The “In the Sellwood Kitchen” cast and crew can be contacted at: erinandmike@sellwoodkitchen.com
Posted by The O'Shaughnessys at 5:58 PM 47 comments: