20.0 All the Best Shrimp Have Coconut Coating 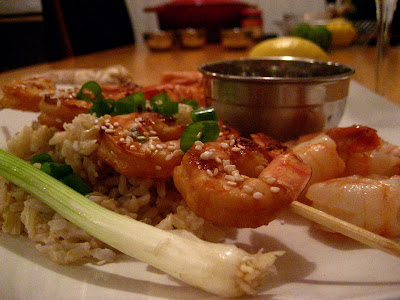 “I always wished to walk with her into restaurants”
What’s it all about anyway? Love & Food & Music! In each of these, I see a mine of beauty, I catch rays of beauty! Perhaps we could last a day or two without Food & Music. But the Love? No. Not me, pal. I couldn’t even make it without the Music (anyone who reads our column knows ITSK is almost as much about Music as it is about Food – it’s the province of the artist to write and discard all the rules). Until I met Erin, the Food wasn’t such a big deal for me either. Now – I need all three! I want all three! So let’s get on with it! Eh? Welcome to the Sellwood Kitchen 2009!

It does seem like ages since we’ve been here, right? Well, the return is triumphant! 3 incarnations of the shrimp! How about that? That’s as tremendous as picking up a triple LP – like the Clash’s Sandinista! How bold!

Where do I begin? Well, with the album, Side One is recommended (sequencing is an art!). But with the trio of prawns? Hmm. But I’m getting ahead of myself (unlike those shrimp which have already been beheaded). 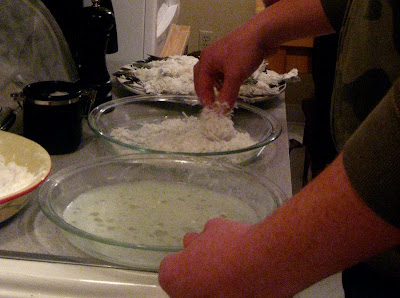 As a typical return to form (and a winning formula for a good time), Adam & Josh arrive for the meal. Earlier, I’d blasted Dinosaur Jr. as I attempted some prep work: We were to barbecue the shrimp. Then I stepped outside to uncover the barbecue. That’s when my spirit turned from Green Mind to Ice Station Zebra. I stepped back inside and slid the door shut. Get the grill pan! (It has “Sellwood Kitchen” engraved on the handle). The snow is gone and the floodwaters have subsided, but the stubborn cold lingers. Let’s stay inside and eat!

In the kitchen: Erin & Adam prepare the meal, as per. Josh develops a sweet, gluten-free dipping sauce for the anticipated coconut shrimp. I’m in the LR typing away, softening my workday mood with George Harrison’s Dark Horse. Have you ever heard “Far East Man”? It’s far out, man! After that, some later-period Cat Stevens (a bit synth-heavy) lulls me into an acceptable demeanor, relaxing my tummy for the shellfish smorgasbord. 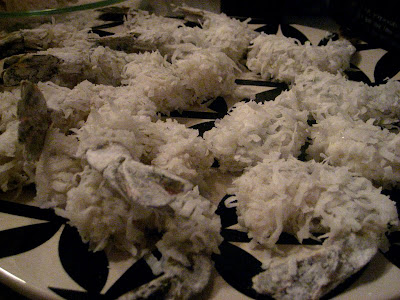 It’s Thursday, five days before Inauguration Day. Let’s throw Hope in there (with the Love, Food & Music). A double-episode of “Earl” nudges out “Kath & Kim”, dampening our mood momentarily. Then the coiling tendrils of garlic’s aroma spring us back to Gratitude! Ah, that we can eat a good meal in a warm home on a cold night… 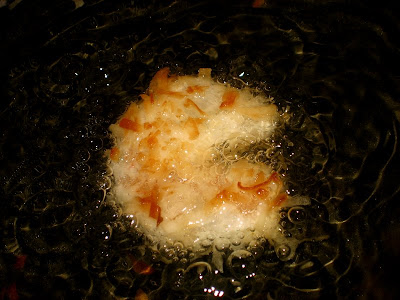 “Erin, what would your catch phrase be?” I shout to the kitchen. “Booyah!” she responds. I thought it should be something else, a compound word uttered when hot oil spits on her arm. 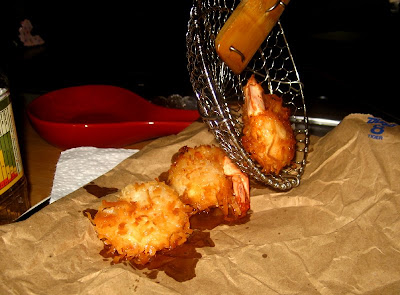 Speaking of catches, the shrimp has reached its penultimate destination on the kitchen table. We dig in. Which shrimp first? The coconut? The garlic? The marinated? The garlic dish is accompanied by a delightfully buttery sauce.

Adam eyes the tiny bowl, “Can I drink that? Is anyone going to eat that?” The garlic butter coats your upper lip. We dub it “Lip Gloss Butter.” The coconut shrimp sauce is equally decadent. We want to eat all the sauces with a spoon. 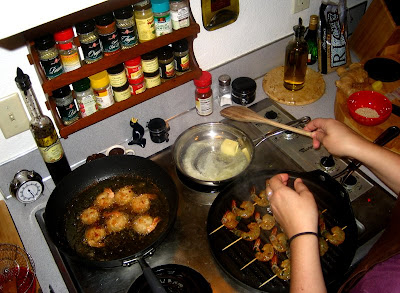 While drinking her Lemon Drop (the favored seafood cocktail), Erin said, “My mom made hummus, but she said it was too lemony.”

“Maybe she used too many lemons”, I reply.

The shrimp disappeared so fast I thought one of the Five Chinese Brothers had stopped by. We ate so much seafood that if you drive to Cannon Beach and put a conch shell to your ear, you will hear our kitchen.

Cleanup isn’t fun. It never is. I’m not cleaning up tonight. I’m too busy “writing the article”. That’s my “job”. I’ll be writing this thing for the next week (which is nice for a change – we usually put together the meal the night before deadline!).

This is what it’s all about. Filling your heart with Love, your ears with Music, and your belly with Food. In this fresh era of America, let’s do our best to ensure all our neighbors benefit from these three basic needs! 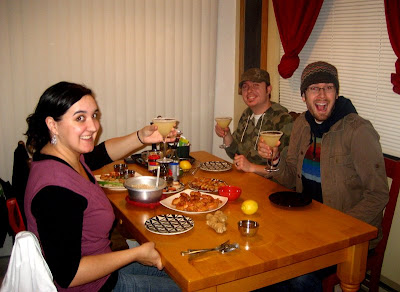 “Hey, Erin, can we have the coconut shrimp again?”

Her response inspires me, and sets the tone for the world ahead:

Erin’s Intro: I'm so excited for this recipe because it means I finally get to fry something that my gluten-intolerant friend can tolerate. Not only did he tolerate it – he inhaled the test shrimp so fast, I don't know if he even tasted it. Eventually everyone got their share of shrimp; we had three kinds: Asian marinated, garlic butter, and coconut. I decided to write this month’s recipe for the coconut shrimp, because it seems like something people probably don't make that often. But it’s so simple, and so delish!


The “In the Sellwood Kitchen” cast and crew can be contacted at: erinandmike@sellwoodkitchen.com
Posted by The O'Shaughnessys at 8:20 PM 47 comments: