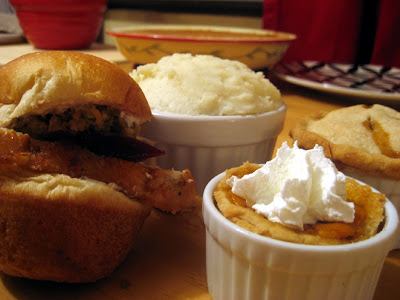 “How long it’s been since yesterday and what about tomorrow?”

Erin’s intro: If I had to pick my favorite thing about Thanksgiving Dinner, I'd pick the leftover mini-sandwiches on rolls. We always use Rhodes rolls, they're in the frozen section, and I think they make the sandwich amazing. Actually I prefer these sandwiches to the Thanksgiving meal its self. Maybe it's just the nostalgia.
Everyone has their own Thanksgiving traditions – this only occurred to me as I got older, of course. We used to have a Turkey Bowl in the pasture. Football, with a break to listen to “Alice's Restaurant” at noon, followed by more football, followed by more food than humans should ever consume in one sitting. Afterwards, we’d lie on the floor in front of the fire, watching movies, until (finally) late night mini leftover sandwiches! Ah, tradition!
Of course things change. We haven't had a Turkey Bowl in a long time. I'm hosting this year for the first time, so Thanksgiving will evolve. We'll start our own traditions like families do. But I will make sure of two things: Always listen to “Alice's Restaurant”, and always save room for the mini sandwiches.
On Sunday, November 8 at 1:58pm, I put on my pajamas (well, my pajama bottoms and a Uniglo Jean-Michel Basquiat Bear t-shirt). My outside errands for the day were done. It was now time to prepare for our Pre-Thanksgiving Pretend After-Thanksgiving Leftover Meal!

Having already donned said sleepwear, I was ahead of the game. When I was younger, the Thanksgiving television viewing tradition, besides watching the Dallas Cowboys play, was the triumvirate of Giant Ape movies: King Kong, Son of Kong and Mighty Joe Young. WOR Chanel 9 showed them every year on Long Island (along with a slew of Christmas commercials).

Later in the afternoon (late afternoon, or maybe early evening, or maybe it wasn’t even Thanksgiving Day at all), we’d tune in to WPIX (that’s Ch. 11 to you old New Yorkers) to watch Laurel & Hardy in “March of the Wooden Soldiers”, which I think was officially titled “Babes in Toyland” but syndication had its way with it, and they might’ve been right, since dopey kids my age were more likely to watch a movie about wooden soldiers than babes (boy, we’re we dumb!). Can you imagine? There used to be a time when 12-year olds watched forty-year old black & white films.

Recently, Thanksgiving, as glorious as that day is, has become the “Christmas Eve” of our harvest holiday. The Day after Thanksgiving is the big day now (although, by “big”, we mean small and quiet and comfy. And our NEW television tradition entails the viewing of the “Lord of the Rings” trilogy. Erin made the startling statement that watching LOTR on a rainy day with smells of warm Thanksgiving leftovers in the air is just a notch less wondrous to her than being in Disneyland. A powerful declaration!

SETTING: The pretend morning after fake Thanksgiving. Rainy. Cold. The office is closed (in this fantasy, as opposed to “real life” where I have to “go in for a few hours”).

“That was some parade yesterday, huh? Remember when the girl from that show sang that song the kids dance to?” I mused. Despite eating everything yesterday, I’m hungry again. Is it time for lunch?

Yes, but what I meant was: is lunch being made for me? Erin knew what I meant. Presently, she and Sarah were redesigning Thanksgiving’s leftovers into phenomenally ambrosial (hence, edible) architecture.

“What are you writing about, the sandwiches?” asks Erin.

“What’s that one with the weird Mickey Mouse?”

Surely, Erin is referring to “March of the Wooden Soldiers!” Said character resembled Disney’s ambassador. You know, it was a capuchin monkey in a costume! Monkey Mouse. But don’t ever watch the colorized version. It’s dumb. Everything colorized is dumb.

Type, type, type. Sniff, sniff. “Let’s hunt some orc!” the television calls. New traditions are forming – this is the soft thrill, the ironic promise of nostalgia: in this obsession with the past, there is the antidote of renewal. Life constantly, insistently, spools out a fresh past, the best moments of which keep us tethered to the present, and by extension, the future.

“What are you gals working on in there?” The smells were, if this is at all possible (and if it is, the pews in my new church will be hewn from self-rising rolls), even more pleasurable than their virginal releases of yesterday.

“THE BEST MEAL EVER!” they shout back.

Happy Thanksgiving Etcetera from the Sellwood Kitchen!
Thanksgiving Leftover Minis
Shepherd's Pie-Inspired Casserole Ingredients:(From Leftovers)
Green Bean Casserole
Carrots, Onions, Celery from stuffing if you had extra (diced)
Gravy
Turkey , diced
Stuffing
Mashed Potatoes
Sautéed Mushrooms
This can be assembled in individual ramekins, if you have them, or one large casserole dish if you don't. In the dish, place a layer of green bean casserole with sautéed mushrooms. Add a small amount of carrots, onions and celery if you have it. Then add a layer of diced turkey. Ladle a few spoonfuls of gravy over the ingredients. Next, press a layer of leftover stuffing over the top of the veggies and turkey. If you don't have leftover stuffing, whip up a box of stovetop, you won't be sorry. Finally, cover the casserole with a layer of mashed potatoes, like a shepherd's pie. Refrigerate. When ready to serve, place the mini casseroles on a baking dish in the oven at 350 degrees for about a half hour, or until hot through. Serve with Mini Sandwiches and the cutest mini apple pie in the world, or just pie.
Mini Sandwiches
Do whatever you want! Mine always include mayo, cranberry sauce, turkey, maybe stuffing, on a dinner roll. Yum! 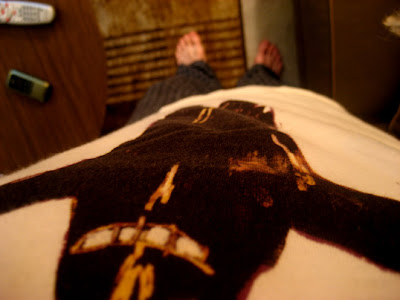 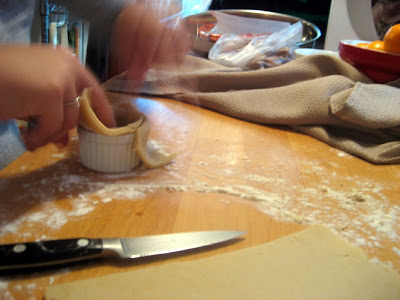 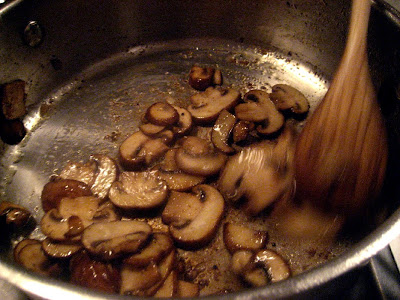 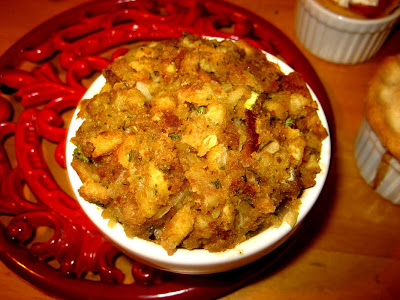 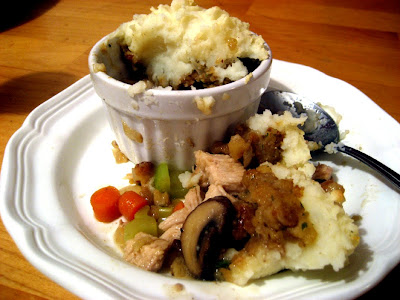 The “In the Sellwood Kitchen” cast and crew can be contacted at: erinandmike@sellwoodkitchen.com
Posted by The O'Shaughnessys at 7:20 PM 40 comments: 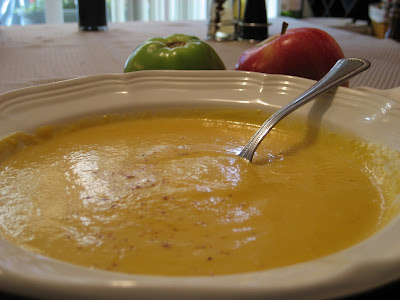 Autumn. Deep in it. It was raining a bit as I shuffled down Linn through a tarp of wet leaves. Earlier that afternoon, I’d fallen asleep on the couch listening to a live version of Coltrane’s “A Love Supreme”. At times my stride matched the dance of Elvin Jones’ drums. But now, through the leaves, all I could hear was the bow across Jimmy Garrison’s bass.

Our autumn began late September in Ohio’s Amish country. The town has an actual name, but I just call it “Amish Country” even though I purchased some delightful cookies from a sweet Mennonite gal. We were visiting our friends Paul & Donna, who made an appearance in the October 2008 episode of ITSK. They have opened a deli in the “big city” near them, a small town center that makes Milwaukie look like Manhattan. Donna is a terrific cook, made all the sweeter by their refusal to take any payment for our meals (which was darn middle-American of them). Also the visit marked thirty years since Paul and I had first met in grade school, and if he HAD charged me for the beef stew (which was out of this world), I would’ve thrown down my cheesecake-covered fork (also on the house) and stormed out of there!

On the Saturday of our visit, the deli participated in the town’s Scarecrow Festival. I bought a cheese-filled sausage and strolled through the fair, judging the entries on my own. “Woodstock Scarecrow” got a “thumbs up,” as did “Scarecrow Spiderman” displayed in a manner on his stake, I found myself silently musing, “Spiderman died for our sins”.

The orange and red sunsets over the cornfields of Ohio made the perfect autumnal entrance for Erin and me.

Back in Sellwood, we embraced the season. To the pumpkin patch! As luck would have it, our friends the elusive (and bitingly satirical) Kelly and Celia were also in the market for gourds. They met us at the Sellwood Kitchen.

Behold! Upon entering our humble abode one encounters the newly constructed O’Shaughnessy Public Library, five bookshelves, charmingly categorized, and containing more unread than read volumes. That’s my fault – I’m a slow reader, but a perpetual collector (though nothing suitable for the Antiques Roadshow, mind you).

Celia seemed more impressed with the library than Kelly who, reflecting on the Travel section’s proximity to the Poetry shelf, offered, “Let’s see what Whitman has to say about Paris.”

Curiously, I don’t have any Whitman.

Off to Alice’s Country Market in Damascus, not so much a pumpkin patch as a pumpkin pile, pre-picked and unmuddied, which was fine with me as I had worn my new Skechers. A hay pyramid, of the Aztec variety, displayed dozens of pumpkins on its ledges. Kelly scaled the monument and in the bright noonday sun, the silhouette looked familiar to the Tanis dig scene in “Raiders of the Lost Ark”.

It was an uneasy scaling, and indeed as she wobbled up the bales, she warned all subsequent climbers that this was not “stable hay” as she had presumed. Luckily, she descended unharmed.

Erin made the fortuitous decision to purchase a pair of butternut squash, a gourd whose playful name would serve well as a 1950’s sock hop dance, performed in tight high-waisted slacks. Later that evening she would turn squash to soup, whose shade so closely matched the color of our cat’s coat, we called it Simba Soup. Unofficially of course, because any cook or writer knows that beyond the Middle Ages, “cat” and “soup” is a poor advertisement for a hot, comforting belly-smile of a meal.


Erin’s Intro: Its autumn, you’ve got to eat this soup!

Cut each squash in half length wise and scoop out seeds. Coat a roasting pan with non-stick cooking spray and place the squash halves inside cut side down. Roast at 350 degrees for one hour. After squash has cooled slightly, scoop out all of the squash and throw away the skins. Bring a large stock pot to medium heat; add a small amount of oil, the butter, and the diced onion. Cook until onion is translucent, about five minutes. Add the squash, broth and half of the milk. Add seasoning and salt and pepper to taste. Using an immersion blender, blend to a smooth consistency. Add more milk to reach your desired consistency, blend again. Heat through but do not simmer. Adjust seasoning if necessary. Serve and Enjoy! 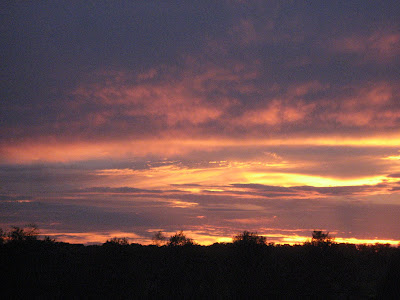 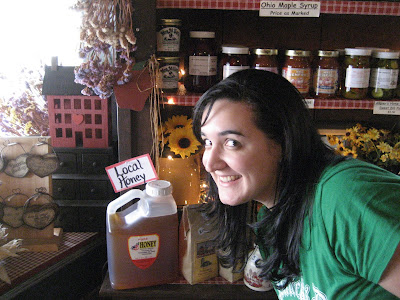 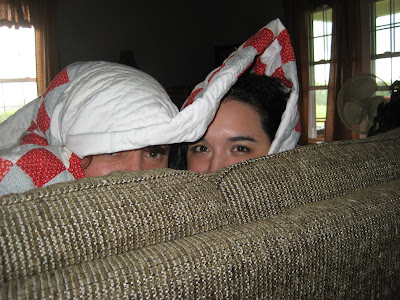 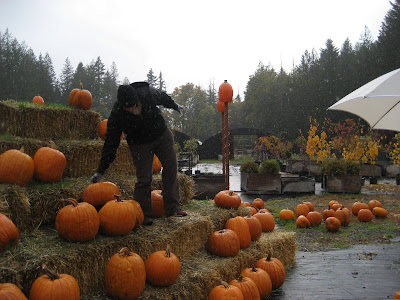 The “In the Sellwood Kitchen” cast and crew can be contacted at: erinandmike@sellwoodkitchen.com
Posted by The O'Shaughnessys at 12:44 PM 32 comments: