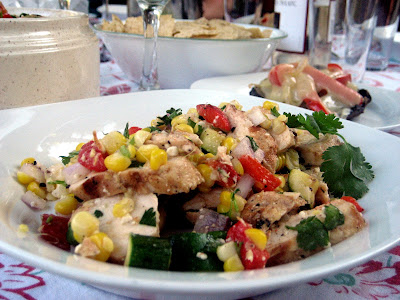 Starring Erin & Mike and Adam & Josh
Filmed on Location near Beautiful Downtown Sellwood
Soundtrack: Stairway to the Stars by Jack Weigand (At the Organ)

“There’s a lot of food,” I remark to Obie, who is mewling up a storm around my ankles. I’m sitting under the pergola at Sellwood Kitchen 2 on the fourth day of summer. Early evening, warm but cooling as the breeze swirls from yard to yard in soft gusts in its own version of “Duck, Duck, Goose”. “Here Comes the Sun”, a live version, starts to glisten from the radio. Seriously. I am not supplying this for literary effect. I mean, it was a perfect night.

Adam and Erin are preparing the food, Josh is setting the table, and I am as usual sitting, sipping and scribing under the sunset dappled wisteria. I feel like James Beard, the only food critic I can ever recall.

Our appetizer and main course are hewn from mostly similar ingredients, though the recipes were conjured independently by our cooks. Peppers, mushrooms, onions, corn, zucchini! Those fresh summer garden tastes and colors I’ve been craving since the first day of autumn! The grill is fired up, or gassed up (much as I will be later).

Earlier, Erin whipped up some fresh guacamole. To think only a couple of years ago I wouldn’t have dreamed of eating an avocado (it looks like a green rock), but now I rank it among my favorite fruits! And so I practically fill up on chips and guac before the Portobello mushrooms arrive. Yeah, mushrooms – that’s ANOTHER garden item I shunned for ages, thinking all mushrooms tasted like those slimy canned ones you slop over a warm gray flank steak.

“I need a little skillet for one pepper and one onion,” Erin queried Adam. These sautéed in the kitchen as the mushrooms grilled delicately outside. The smells wafted into the sitting area where I put on an LP of organ music by Jack Weigand and swiveled in the “chair of contention (and tension)”, the latest treasure Adam discovered at the Bins. Josh isn’t crazy about it. But what it lacks in comfort, it abounds in charm.

“Oh, he’s gonna die in there,” I say to no one (as everyone else is working on dinner and here I am still sitting in the sun, contemplating issues philosophical and ethical). “What is Life” by George Harrison starts to glisten from the radio. Seriously. I am not supplying this for literary effect.

Suddenly, the food arrives in front of me! The Portobellos are full of onions and peppers and draped in a silky slice of Swiss! Adam’s grilled vegetable and chicken salad is summer incarnate! We eat it leisurely.

“Tonight’s meal is brought to you by our wardrobe”, announces Adam, who cashed in a bag of togs at a resale shop.

Erin asks, “Remember body suits?” I did; they were all the rage in the early 90s. Josh wasn’t familiar with them. We explain they were sort of like adult onesies.

“That’s only three, and one’s a ‘w’,” Erin laughs. Then I laugh. Then Adam laughs. Then Josh laughs and the cat laughs. Even the bug laughs his last little laugh. Welcome summer!


Erin’s Intro: This Sellwood Kitchen started out like so many others. I had no idea what I was going to make until I got to the store. I was shopping for some inspiration, and I found it. I had no time to communicate with Adam about the plan, but somehow we ended up on the exact same page. Grilled (as if we’d do anything else) ingredients, and southwest flavors. It was almost as though we planned it. I couldn’t resist giant Portobellos, and Adam couldn’t resist grilling absolutely every ingredient in his dish. It turned out to be a great pair. The chicken and veggie salad may even end up at a wedding reception catered by ITSK this summer, who knows!

Slice the onion and pepper. Heat sauté pan on medium, add oil, toss in peppers and onions, season with salt and pepper. Sauté for about 10 minutes. Set aside. Remove the stem from the mushrooms. Brush with oil, season with salt and pepper. Place mushrooms on BBQ, stem side down, for about 5 minutes. Flip mushrooms, fill with pepper and onion mixture, and top with Swiss cheese. You may want to move them to the top rack on your BBQ at this point, to avoid burning, while the cheese melts. When cheese is melted, serve immediately.

Place diced red onion, cilantro, and feta in a large bowl, set aside. Season chicken with salt, pepper, oil and grill seasoning. Let rest in refrigerator until ready to cook. Heat BBQ to medium high. Place 4 ears of corn directly on grill, do not remove the husk. Add chicken to grill. When chicken is halfway done, place zucchini, flesh side down, on the grill. Add red pepper to grill, turning to blacken each side. When all ingredients are done, cut corn from the cob; add to bowl with onion mixture. Remove skin from red pepper, dice and add to bowl. Dice zucchini and add to bowl. Cut up chicken into bite sized pieces, and add to bowl. Add lime juice, olive oil, and cumin. Season with salt and pepper. Toss all together. Enjoy! 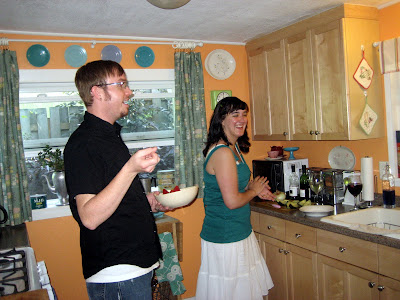 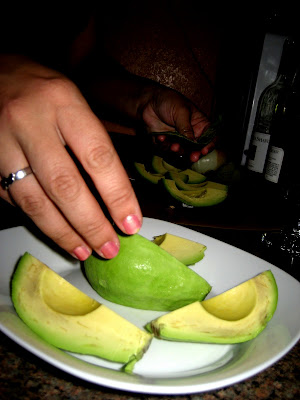 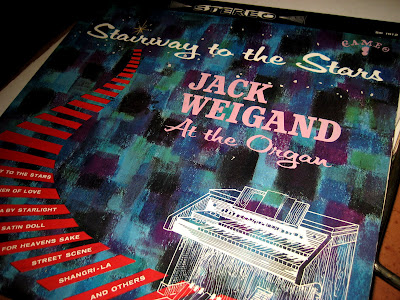 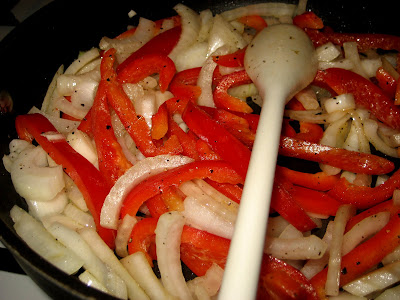 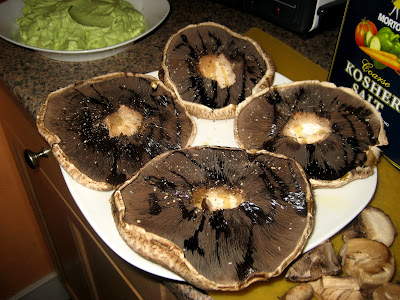 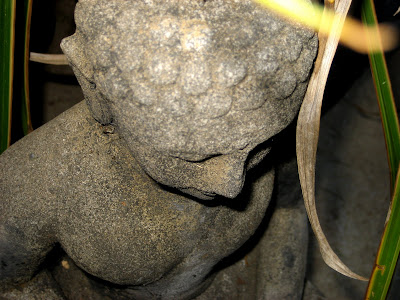 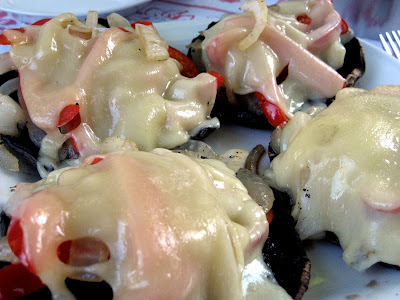 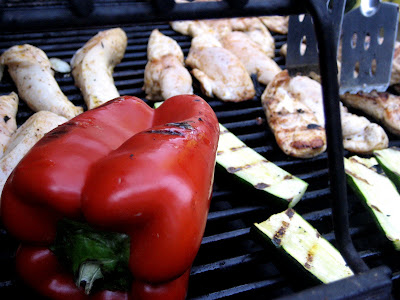 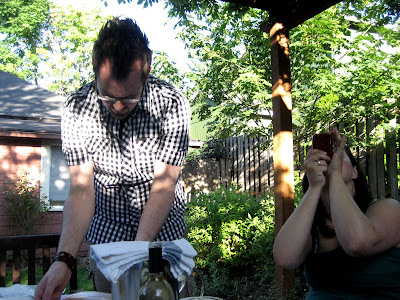 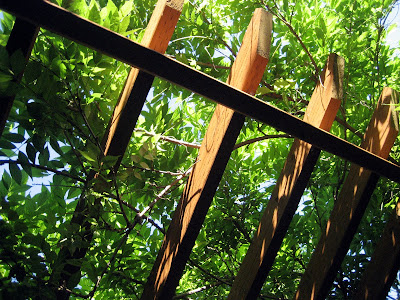 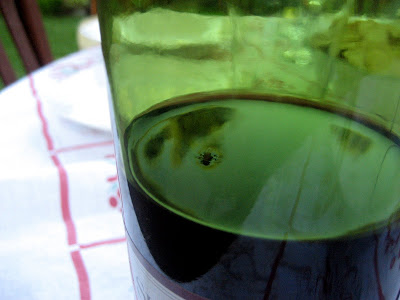 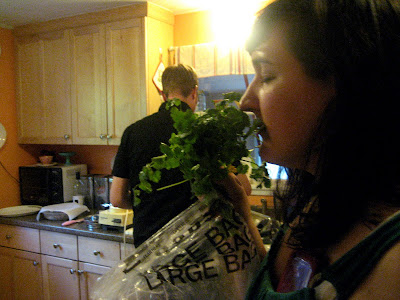 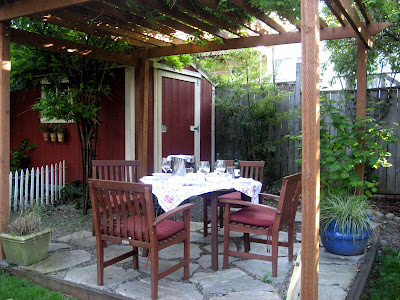 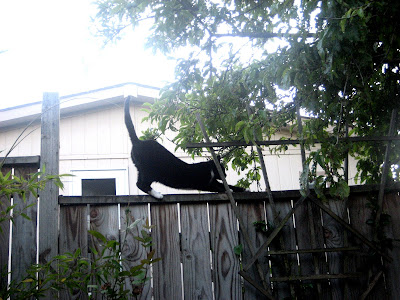 The “In the Sellwood Kitchen” cast and crew can be contacted at: erinandmike@sellwoodkitchen.com
Posted by The O'Shaughnessys at 7:41 PM 24 comments: